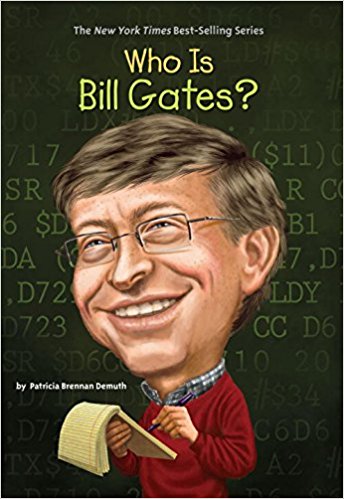 I was looking for a good biography about Bill Gates, the Founder of Microsoft for a long time. But I could not get hold of one except what I read about him on Wikipedia and other sources. But luckily, I had the pleasure of reading Patricia Brennan Demuth’s “Who Is Bill Gates?” last week. Though the book is very short – I think this book is meant mostly for children and young adults – it summarizes a good deal of Gates’ life in to shorter chapters. This was enough information for me till I find a comprehensive biography or an autobiography of Gates someday.

Though some people dislike Bill Gates for being a copycat and an unsympathetic businessman, I admire the man for initiating such a big revolution in the computer industry in a relatively short time. Without him, we would not have had access to computers and the internet within this short period of time. When I was a schoolboy in the 1980’s, the message given to us by our teachers and the media was that there would be a robot at every house by the then much awaited year 2000. But it was not to be. As of today, the robots are used in places like research laboratories and factories but it is not a domestic item as yet. Perhaps it will take a much longer time than anticipated by the science fiction writers in the past. Instead, most of us had a PC on our desks by the year 2000. To my knowledge, no science fiction writer could predict the big revolution of the PC’s would do in the world. But thanks to Gates, affordable PCs with sophisticated software came to our tables at offices and houses making our lives more comfortable.

Patricia Brennan Demuth’s biography “Who Is Bill Gates?” takes us a journey through Gates’ childhood, youth, adulthood till the time he formed Bill and Belinda Gates Foundation.

Computers were a luxury item that was hard to come by when Gates was a young person. Thanks to his school, the Lakeside School, he had access to a teletype machine which was more like a typewriter than a computer. He was greatly inspired and spent many hours as he could in the school ‘computer lab’ that was devoid of computers. Only big corporations and government institutions could afford to have huge mainframe computers which cost millions of dollars. But Gates had access to computer manuals in the school computer room which he read enthusiastically. He wrote his first computer program at the young age of thirteen!

The book informs the reader as to how Gates was inspired by the teletype machine, then how he found access to the computers at General Electric and how he met Paul Allen who eventually became the cofounder of Microsoft. According to the author, ‘the geek’ in Bill Gates changed after his marriage to Belinda French and he became a family man to his wife and the three children.

Life was not easy for Bill Gates, though he was born into a well-to-do family.  He had to work hard tirelessly to learn computers at a time when it was not easy to access computers or related knowledge. So, luck did not come to him but he worked hard and went in search of luck.

The book says how Bill Gates decided to step down as the CEO of Microsoft at his prime age as a business magnate and diverted his full attention to Bill and Melinda Gates Foundation which was set up to help the world with the money he amassed through his business. He did this at a relatively younger age of 52. This is the best age for most of the other businessmen to thrive at business, but Gates thought otherwise. So, all those people who criticized Gates as a mercenary tycoon who was interested in only making money can now look back in shame,  as to  how Gates  utilized the same money he accumulated for  social  welfare  & betterment of the people  of the world.

One thought on “Who Is Bill Gates? – Patricia Brennan Demuth”