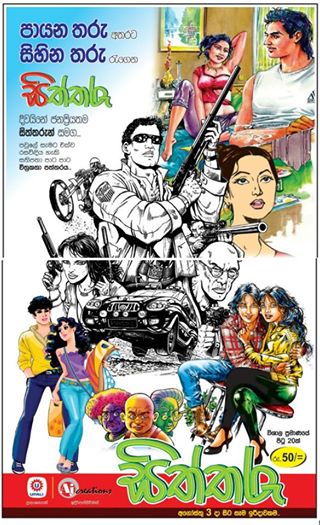 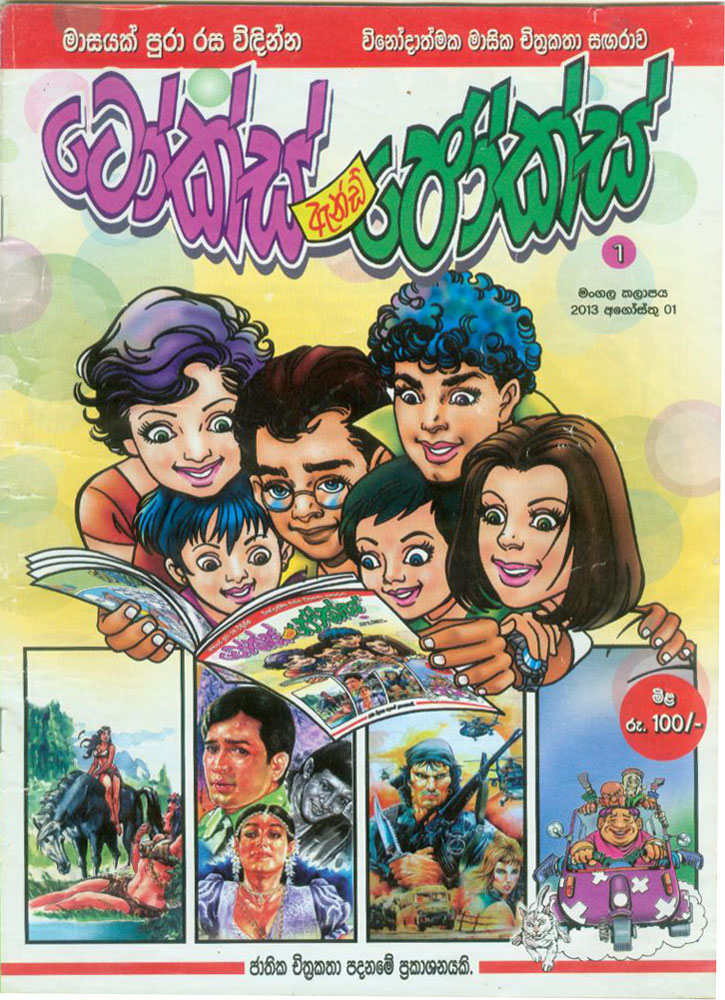 I had the pleasure of reading Sunil Ariyarathna’s “Chithrakathawe Wanshakathawa” book recently. My friend Wasantha Samarakkody, who is a comic lover, had bought the book. He has a collection of old comics as well and he agreed to scan and send me those to be uploaded in to http://chithrakatha.wordpress.com/ which is done by a friend of mine in Mahawilachchiya.

The book is a good research. The book tells you how comics (chithrakatha) evolved from cave paintings to temple paintings, Sarlis Master to Susil Premarathna to modern day artists. A detailed description is given to each major comic artist while less information is given for minor players in the industry.

There are a lot of comics from the early days to modern days printed in the book. No wonder the price is more than 1,000 LKR. I wonder why the parents, teachers, adults objected only the modern comic artists for exposing nudity as the earlier artists exposed even more nudity. You can understand it well when you look at the way the ladies have been depicted in early day stories. How come the old nudity is good and the modern is bad?

If my memory is correct, I got used to chithrakatha (comics) even before I entered Grade 01. We didn’t have Montessoris during our time and there was less access to story books (except for some Russian story books my late father got from the Soviet Union) and the only reading material was the comic paper.

“Siththara” was the most famous and adored while “Sathuta” was widely available as well. There were some other papers too in the market which didn’t last long. “Dasuna” was special because it was designed in landscape style. “Sathsiri” was started by Camillus with a breakaway artists group from Siththara and the latter was affected a lot and Sathsiri became the preferred comic paper.

I preferred Eunicor over all the heroes in the comics. Toga was attractive too but he was ‘poorer’ than Eunicor and was clad only in a piece of leopard hide while Eunicor was smartly dressed with all black waist and a pair of tight shorts. He had a white transparent tape over his eyes which gave him a majestic look. He was muscular than Toga and looked braver too. He never was scared of any challenge while Toga was scared and excited in the last square of the week’s page. But he fights the enemy and wins next week. A friend of mine from Grade 01, Dhammila had the everlasting question that who will win if Eunicor and Toga fought each other. My endless attempt to tell him that the two were in different stories and will never meet each other didn’t have any effect on Dhammila and he has the same question to date.

I started drawing Eunicor in exercise books and it got a big demand in the class and even in upper classes. Many would bring me blank exercise book leaves in exchange of one comic of Eunicor I drew. Since my parents found it difficult to buy exercise books for me those days, this ‘earning’ of papers helped me as I could use them pinned together as a book.

We never bought comic papers ourselves. We usually borrowed them from the others who used to buy. One paper would go to more than hundred individuals every week. Some had the habit of preserving the papers or a single story. To my knowledge, the most collected story was “Ithin Eeta Passe.”

Some students used to cover the cover pages of the school books with comics papers. We were too obsessed with the papers and removed the covers, read the stories and put the covers again. The owners of the books were greatly annoyed but that was what they get for putting picture stories as book covers.

When I was transformed from a kid to a teenager my drawings were also transferred from heroes to lovers. I was so shy to draw girls during the initial stage of the transformation and I would draw a beautiful girl and before anyone saw it, would put a moustache and sunglasses and make her a boy. Later I mustered courage and started drawing girls’ pictures but was very shy to draw their breasts. It took some more time for me to draw big breasted girls.

I drew some pocket cartoons and sent them to “Madhura” but none of them appeared in the paper. I drew few single episode comics too but they too didn’t appear in any paper.

It took a long time for me to find how Sarath Madhu drew Dedunu and Kelum’s hair with such beautiful curls. Later I found the way he did it and I too started drawing them. But my favorite female characters became short-haired girls. I loved short-haired girls those days. They looked cuter and smarter.

I loved Wilbert Ranasinghe’s “Sellan Salli,” a cowboy story. It was only last month I came to know that it was the same story as “For a few dollars more” movie where Clint Eastwood plays the title role.

Sanda Kumari was a love story between Kanchana, a high school girl from Kandy and Dinindu, a university student from Peradeniya was also very popular. It was presented by Ananda Dissanayaka. Unfortunately the last few parts of the story had to be drawn by an amateur artist who messed it up.

During the same period I had the privilege of reading some Superman comics in Sinhala. The comics came as magazines and a whole story was included. This was done by Wijeya Group and I enjoyed them a lot. I am looking for a copy even today but they are too rare to find now.

Kumudu Tharaka was very talented in drawing teenage stories. The way the artists drew boys and girls was excellent. I can still remember the way the artist had drawn a kissing scene between a teenage boy and a girl. It had all the features of the intensity of a first kiss.

Aravinda came to the scene with the story “Suranganawak Horen Ewithla” which was very popular among the youth due to its theme and the way the young girl and her aunt were drawn in exposing nighties. Susil Premarathna’s Judy too was always in a nighty. The teenagers those days enjoyed these a lot as it was the only way they could access some nudity.

“Vision” was a different type of comic paper that came to the scene in late 90’s. It was a publication with stories in English with difficult words given in Sinhala. It was even approved by the National Institute of Education to be used as supplementary reading for schoolchildren. I used some of the issues for my English classroom teaching. I heard that it was a commercially viable paper but happened to stop due to some management issues.

Sarath Madhu’s departure from Siththara to launch Dasuna was a big blow to Siththara. His two stories, Ithin Eeta Passe and Uniquo were continued by Gunapala Jayalath who did a very poor job as he couldn’t draw a picture to balance the size of a head with its body. Later Ithin Eeta Passe was drawn by many artists and the story got carried away. It ended poorly by the two lovers losing each other. The story didn’t deserve such an end. Recently a teledrama was done by some idiots loosely based on the story and it killed the taste of the whole story.

Comics were blatantly criticized by the schoolteachers, intellectuals and parents of the children. This was a detrimental blow to the industry. More blamed the papers for being lewd. This is true up to some extent and to my knowledge, that trend was set by Sumathipala-Jothipala duo with the story “Suddi” which included nudity and lewd language to a level that was unacceptable. The rest of the artists also followed suit and some parents and principals totally banned comics at homes and schools.

Towards the late 80’s and early 90’s the quality of the comics was deteriorated and readers got away from them as they had teledramas and video movies as replacements for entertainment. A host of new, but short lived comic papers such as Hithawatha, Chithrakatha, Siwrasa appeared and disappeared.

Today the comics are limited to some newspapers as small strips and the golden era of comics died a natural death. I don’t say comics were bad. It educated us a lot. From it we learnt about how things go in other parts of the country and the world. Some stories were based on historical events. The stories produced a lot of artists within the papers and a lot of youth who became artists by just copying the originals. Today we don’t see such artists even to draw a banner in a funeral . They just go digital.