For the last three years, I have been writing a post on rambutan season each year consecutively. After reading my posts, two gentlemen from an Indian fruit farm called Homegrown www.homegrown.in visited Sri Lanka and took rambutan fruits and plants to India. They were particularly interested in Malwana rambutan variety. Now they grow Malwana rambutans in their farm in Kerala, India. They personally visited Malwana with me to see rambutan gardens. I too bought two plants two years back and one survived and thriving now. I learnt from my Indian friends that their plants are also growing well.

Rambutan on display at Kalagedihena

This time around rambutan harvest has been very good just like the last two years. As a result the price of a single fruit has come down to 5 rupees in Colombo and suburbs and in Kandy as I checked the prices myself. In Malwana, a fruit costs around 3 rupees according to the rambutan sellers in Kalagedihena along the Colombo – Kandy road. Rambutan prices in Anuradhapura, my hometown, is little expensive. They sell 15 fruits for 100 rupees. But fresh fruits are available in Anuradhapura unlike in the past.

A pregnant woman selling rambutans in Kalagedihena. It was from people like this that the notorious deputy minister allegedly collected commissions.

It was reported this year that a politician, a deputy minister from the previous government took a cut from the small scale rambutan sellers in Gampaha district, his electorate, by force. After his party was defeated at the presidential election in early January this year, rambutan sellers lodged a complaint against the former deputy minister. He was so corrupt that his own party rejected his nomination to contest to the parliamentary election scheduled to be held in August this year along with some other former MPs who have corruption and drug trafficking allegations. This is a good move. It is sickening to hear that a person in the capacity of a deputy minister collecting commissions from the poor rambutan sellers. Imagine what he must have taken from the mega projects in his electorate and in the capacity of a deputy minister in his ministry. 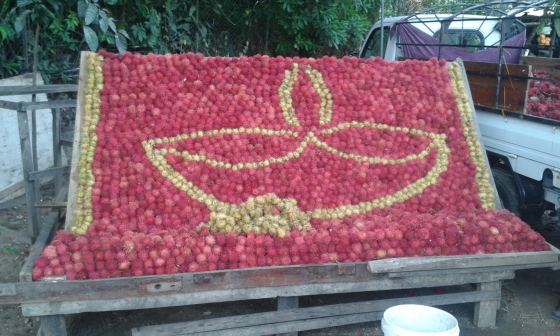 Rambutan on a creative display in Digana, Kandy

OK. Back to rambutans. According to the sellers, the season will last around three more weeks and this is the peak of the season. Prices will fluctuate according to availability of the fruits in coming weeks. So, if you want to visit Sri Lanka to taste rambutans, this is the high time you visited. Do not regret and postpone your visit. If you visit Sri Lanka these days, you will see rambutans from the airport road itself to almost all parts of Sri Lanka. Mohammad, an experienced young driver from Colombo who can speak decent English has been our chauffer during our visits to Malwana and you too can contact him on 071-2669696 and arrange a trip to Malwana rambutan gardens. He knows the right places and people. Just let him know in advance. His fares are reasonable as well.

Though there are two colors of rambutans as red and yellow, red variety is the most sought after by the customers though the tastewise there is no big difference. Malwana variety is the most popular over other types that come from adjoining areas of Malwana.

These are some useful links to websites about rambutans. Apparently, there is a dedicated site called www.rambutan.com with a lot of information and lovely pictures. Though the site design is not very professional, it has a lot of necessary information.